Why is a moderator who has been around for 8 years a new contributor?

Today while I was reading a linked question on this answer, I found that Paul White, a moderator who joined more than 8 years ago and currently has around 55k reputation points and 900 posts, is showing up as a new contributor on this question. 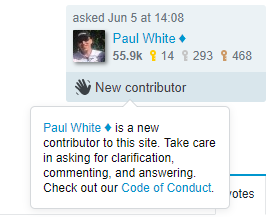 He's not showing up as a new contributor on his self-answer to that question.

I thought maybe his first question was asked recently, but no, it was asked back in 2014.

According to What are the exact criteria for the "new contributor" indicator to be shown?, the new contributor indicator is only shown when the author first posted less than a week ago (which is definitely not true in this case).

Why has Paul White suddenly become new again? And why only on the question and not its self-answer?

Paul originally asked that question from a brand new, anonymous account (to encourage answers and gauge the reaction to the question on its own merits): https://dba.stackexchange.com/users/182461/user182461

After the post was answered, ownership of that post was transferred to his account in order to be able to accept his self-answer without breaking the site rules*.

The "New Contributor" indicator is (apparently) attached to the post, rather than to the user. Which is why it has stuck around. It will expire naturally after 7 days.

*It's perfectly acceptable to have multiple accounts, as long as you don't do anything that wouldn't be possible from a single account - for example, voting for your own posts to gain rep. In Paul's case, he would have gained +2 illicit reputation points for accepting his own answer from another account, and +15 for the accept (self-acceptance usually awards no rep).

Not the answer you're looking for? Browse other questions tagged support new-users .

8
Are bumps appropriate?
18
Can we have an Off-Topic > Belongs on StackOverflow option?
10
How can comments disappear?
1
Any recourse when bounty not awarded due to honest misunderstanding of auto-awarding?
9
Why was my answer deleted?
5
Closing questions of the same pattern or answering them for the use case?
0
Spam flag declined on strange answer