Why was my answer deleted?

Rather than assume I understand the reason that my answer was deleted, I wanted to just post it here and open it up to public scrutiny. Special note: my answer used the non-deprecated method. It was submitted before user @a_horse_with_no_name commented about the chosen answer being deprecated. I think by all criteria it qualifies as a useful contribution to the site. Without which the only answer standing is the deprecated option. This isn't advantageous to the person asking the question, or to the rest of dba.stackexchange.com 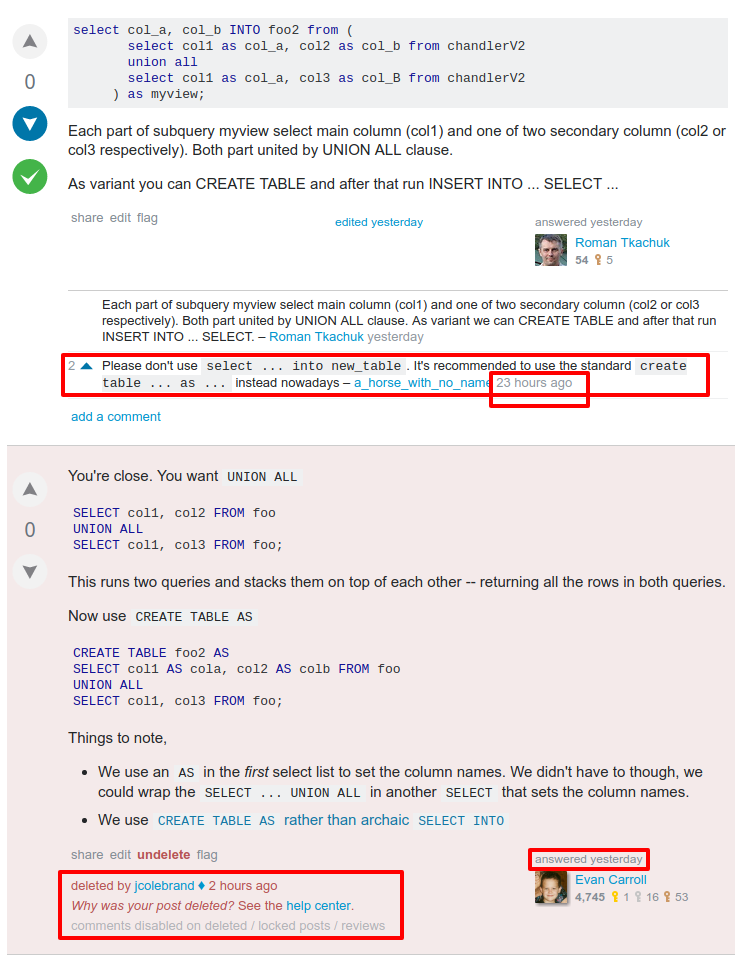 I don't see any issues with your answer. All I can assume is that a flag was raised and @jcolebrand handled it, possibly incorrectly. There is nothing that warrants deletion in this way. If someone had an issue with your answer, which is answering the OP, then it should have been shown with voting or comments.

Your post doesn't fit any of the flags, unless I'm missing something. 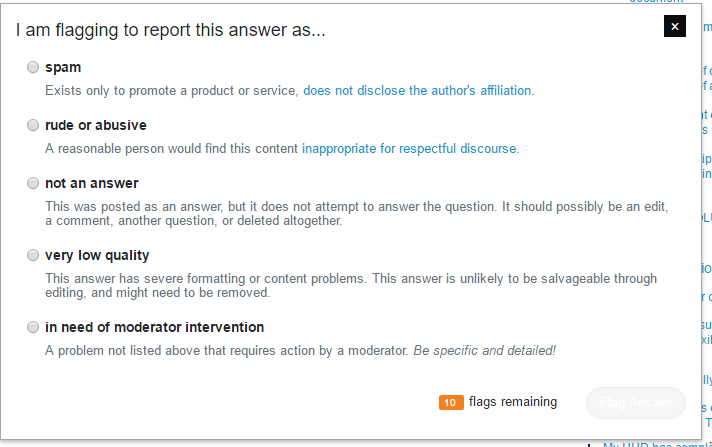 There are things that have happened behind the scenes that Evan is not being very, well, forthcoming about. I can't get into detail (though the edit war on the question is relatively public and should provide some clue), but I agree with JColebrand that removing Evan's participation from the question was not unwarranted. Two moderators (so far) agree that his being involved with that particular question involved more risk than any potential value.

Once I got into a car accident because someone merged into my lane without checking if I was there. When the cop arrived the person who merged into my lane tried to pin the crash on me because I was "passing on the right." Technically in the States you aren't supposed to overtake someone from the right lane, but I wasn't speeding and the other person crashed into me. The cop ended up writing the other driver a ticket, not me. Once they realized the cop was giving them a ticket and not me they became upset with the cop. You remind me of that driver. You appear to be angry at "the cop" and not really taking ownership of your contributions that caused the moderators to step in. It is clear based on the question edit history that the OP didn't appreciate the edits you were continually forcing on them. 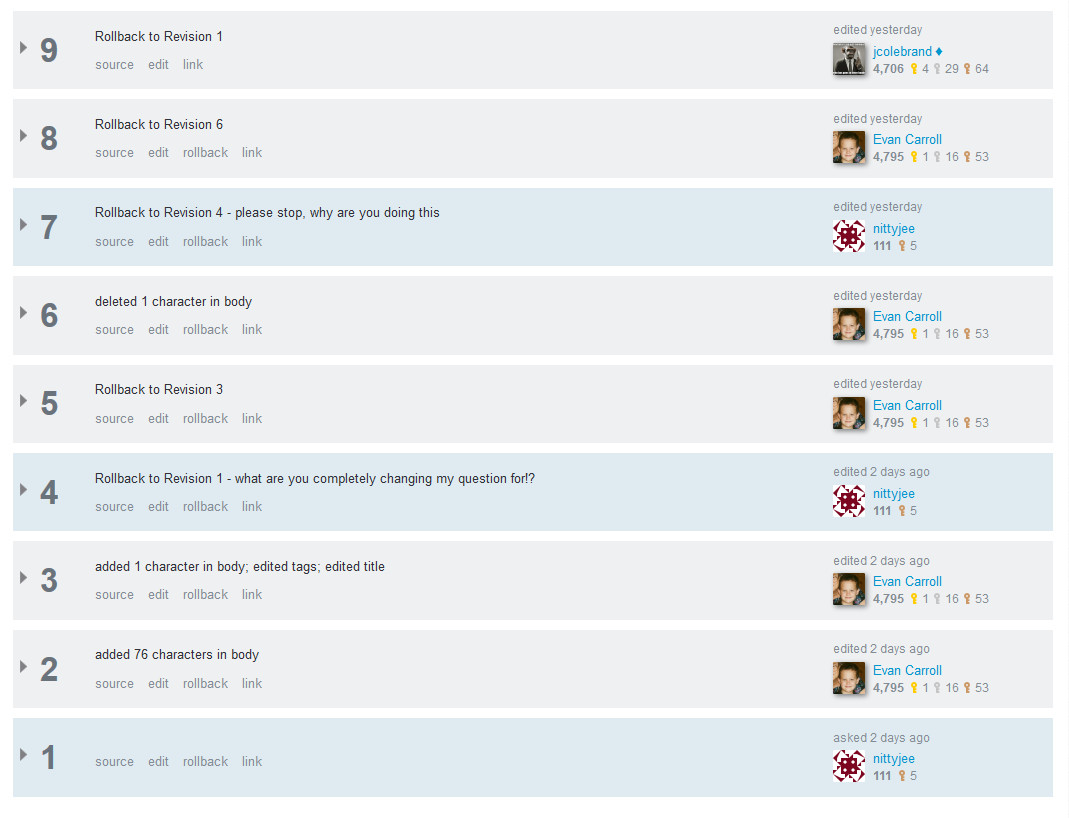 Ultimately I don't know the whole story. From what I've seen of your of your combative behavior in the past, and the edit history of the question, I completely believe Aaron when he says there is more here than what you're saying. Furthermore, from what I've seen and read the moderation team we have on this site is excellent. I have absolute faith in them, and their judgment.

I agree with your claim that on the surface the screenshot of your deleted answer looks innocuous. However I'm confident that what is on the surface isn't the whole story. I don't believe that jcolebrand would randomly stumble over to your answer and delete it without cause. I've repeatedly been impressed with his professionalism during every interaction I've had with him and seen him participate in. Also he has been a mod for a long time. I find it hard to believe that he would suddenly go rogue now.

In summary, I don't know the whole story so it is impossible for me to definitively say if the mods actions were on point. At the same time I strongly believe in the good faith of our mods and trust their judgment. That trust combined with what I can see, and what I've seen from your past interactions, lead me to believe that the mods were taking what they feel were appropriate actions, so I fully support our moderation team.

One of the considerations (that I am willing to go into here) was that retaining your answer might lead to a continuation of the unhelpful interactions between you and the question author.

Regarding the "edit war" on the question, let me repeat the advice I left on another meta question:

An edit is still fundamentally a suggestion for improvement, even after the Edit Questions and Answers privilege has been earned.

If there is resistance to your suggestion, even unwarranted and unjustifiable resistance -- just let go and move on.

In other words: Do not attempt to force someone to accept an edit. Edits are good; fighting is bad.

Ultimately there are moderators to adjudicate in the rare cases where an author's preference might need to be overridden for the benefit of the wider community.

Enough time has now passed that I consider the risks have diminished. In light of that, I have reinstated your answer on this occasion.

For the record, I completely support the original actions of jcolebrand. He is also aware that I am undeleting your answer now.

We try hard to avoid suspending people on dba.se. Wherever possible, we will take less serious action in the hope that the underlying message is received and acted on.

Not the answer you're looking for? Browse other questions tagged discussion support moderation .

11
Comment of OP fundamental to question
-16
Is there any way to fix reputation mechanics here?

1
Why was this question closed?
9
What Constitutes Proper Editing of Questions and Answers?
3
Deleted question by mistake
2
why was this migrated
7
Post Deleted Answer?
8
Why was my “not an answer” flag declined? The “answer” amounts to “thanks”
1
Any recourse when bounty not awarded due to honest misunderstanding of auto-awarding?
1
Score cutoff settings for “unanswered”
10
Why are related / similar questions being closed as duplicates of questions that they aren't duplicate of?