Why are you rejecting this Edit - Changed

I seem to recall that the options for rejecting an edit included "Too minor" or something similar. Just wondering about the reasoning behind taking that option off? 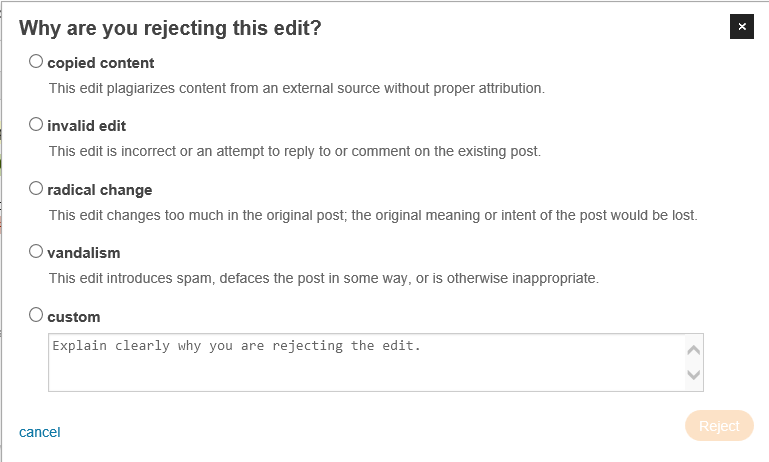 There are at least two questions where this change has been suggested/discussed:

Finally, although I don' think there is a public announcement yet, except for the discussions and comments linked above, the "unofficial list of new features and various changes to Stack Overflow and the Stack Exchange network" , maintained by the users, in the meta question:
Recent feature changes to Stack Exchange, has:

2014-09-10: Suggested edit review offers a new button “Improve Edit” instead of “Improve”. This action will fail any known-bad audits, while "Reject and Edit" action will pass these audits.

6
Clarification on suggested edits that basically just remove “Thanks!”

8
Should there be dashes in Oracle-11g, Oracle-11g-R2, etc.?
5
Why is this question downvoted so much?
15
What should our list of off-topic close reasons be?
11
Are “certification” questions considered off-topic for dba.se?
22
Policy Change : Disallow unregistered users from asking/answering questions?
6
Undo accepted edit back to pending, not full revert
5
Closing questions of the same pattern or answering them for the use case?
8
Editing other people's answers
11
Add Licensing questions as off-topic on help/on-topic page?